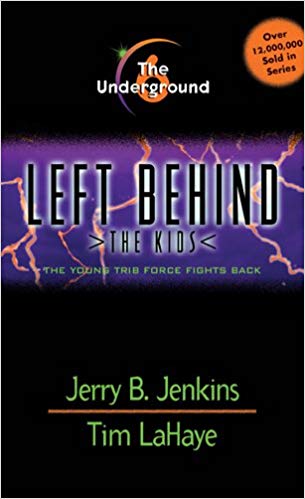 The Young Trib Force unleashes the power of the printed page through an underground newspaper at Nicolae High. School authorities are enraged after only a few copies of the first edition are distributed. After Judd devises a plan to distribute a copy of it to every student in the school, the authorities search with a vengeance for the kids responsible. Follow Judd, Vicki, Lionel, and Ryan as they and trusted friends face one close call after another until one of them is caught. (Description taken from the book: The Underground. Story — Violence/Scariness — N/A Language — N/A Sex/Love — Four kids/teens live in the same house (three boys and one girl) but don’t do anything sexual. Drugs/Alcohol — A teenager takes a lot of sleeping pills to commit suicide (but doesn’t die). Other Info Title — The Underground Author — Jerry B. Jenkins & Tim LaHaye Series — Left Behind: The Kids Book in Series — #6 Pages — 111 Publishing Date — 1999 Publisher — Tyndale House Publishers How to Get The Underground — Amazon-TheUnderground *The more stars the better.