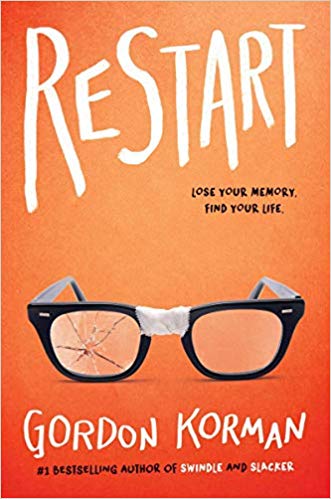 Chase doesn’t remember falling off the roof. He doesn’t remember hitting his head. He doesn’t, in fact, remember anything. He wakes up in a hospitable room and suddenly has to learn his whole life over again… starting with his own name. He knows he’s Chase. But who is Chase? When he gets back to school, he sees that different kids have very different reactions to his return. Some kids treat him like a hero. Some kids are clearly afraid of him. One girl in particular is so angry with him that she pours her frozen yogurt on his head the first chance she gets. Pretty soon, it’s not only a question of who Chase is–it’s a question of who he was… and who he’s going to be. From the #1 bestselling author of Swindle and Slacker, Restart is the spectacular story of a kid with a messy past who has to figure out what it means to get a clean start. (Description taken from the book: Restart. Story — Violence/Scariness — Punching, shoving, bullying, someone falls from a roof, someone says they wish a kid could go through a woodchipper. Language — Characters say “Oh My God” a few times….